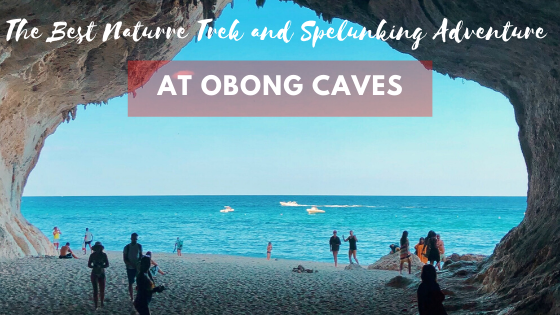 For a city dweller like me, life can be stressful.  Going on a long road trip is a good way to escape from our busy schedules. Traveling south of Negros Occidental, particularly in Hinoba-an is probably a good ide.ea to relax and just enjoy the scenery of green trees and mountain ranges along the road.
Exploring the beaches and other tourist attractions in Hinobaan is incomplete without visiting Ubong Caves. So, let us find out why tourists keep coming back to this famous natural wonder of Hinobaan.
How to get there
Hinoba-an is the last municipality in the southern side of Negros Occidental.  If you are coming from Bacolod City, it would take you 4-5 hours by public transport and 3-4 hours by private car to reach the place.
It is best to arrange for an overnight stay in one of the beaches there to maximize the long drive you took.  During our trip in Hinoba-an, we stayed at Brazaville Beach Resort.
There are many water activities you can do while staying on the beach plus they have nice surroundings worthy of an Instagram photo.

Please read our beach experience in Brazaville here:  BRAZAVILLE BEACH RESORT: ONE OF THE HIDDEN GEMS OF HINOBAAN
To get to Ubong Caves, you have to take a 15-minute  tricycle ride.  Tricycle to non-Filipinos is a three-wheeled motorcycle that can ride other passengers, other than the driver.
Aside from the public commute, you have another 15-minute hike to reach to Obong Beach Paradise, which is the reception area and the starting point for the cave exploration.
Another cave is accessible only through a motorized banca.  So if you are the adventurous type, you may rent a banca and enter the cave from the sea.
What to see
There are three caves they collectively called Ubong Caves.  With a tour guide, we explored the first two caves by entering a very narrow hole, you won’t realize that it was a cave opening.
At first, I was hesitant about going through a dark alley,  not knowing what lies inside.  I continued knowing that I am in the company of my family.  We were briefed not to leave our assigned group.
We were also advised to make sounds,  maybe to ward off some spirits from joining the group or other insects and animals, especially snakes from attacking us.

Sadly, the cave’s wall was in a state of destruction  There were many writings on the walls and limestones were dead.  But, others are still surviving, forming rocks reaching up to the ceiling.
Some formed interesting shapes and figures.  Thankfully, as the tour guide told us,  the ecosystem in this area is still alive because of the presence of growing stalactite and stalagmites inside the cave.
Moreover, we saw thousands of bats clinging on the ceiling.  They made sounds when lights were trained in a colony.
Bats are helpful in the ecosystem because they spread seeds that will grow as trees in the future and they eat insects that are dangerous to humans.
The most interesting part of the tour was when we went to a corner where large rocks formed like the shape of a wild pig and a whale.  It was stunning because it appears like the real figure of the animals.

We finally went outside the cave through a very wide entrance, almost 50 feet high facing the sea.

What to do
Aside from caving, you may also swim or go snorkeling because the waters are pristine and crystal clear.
I saw different species of fish swimming near the shoreline. You can dive during high tide inside the third cave.
For overnight visitors, you may inquire from Obong Beach Paradise if they can accommodate you.
At night,  you may build a bonfire, watch the sunset and have dinner by the beach.  At dusk, you can watch bat flying out of the cave to hunt for food.
Where to stay
Aside from Obong Beach Paradise, you may opt to stay in one of the beach houses lining the coastal area.
I advise that you should arrange for your accommodation in advance so that your itinerary can be accordingly scheduled.
Most of the beaches have a Facebook page where you can access to book your transaction.

Where to eat
Upon booking your accommodation, you may also inquire from the resort counter if they are serving meals.
You should immediately know where to eat upon your arrival in Hinobaan because you are hungry by then.
Three hours without putting something in our stomach is hard for others.
Trivia
During the war in 1942, one of the caves in Ubong was used by the late Major Jesus Villamor as a hideout to track down the movement of Japanese invaders in Negros Occidental.
He served as the contact person in Negros Occidental of General Douglas McArthur, who was at the time based in Australia.
Villamor Airbase in Pasay City was named after him to honor his heroism.
Travel tips
Obong Caves are considered nature’s gifts.   Hinobaan is lucky to have these caves which took so many years to form.
We always have to preserve what nature has given us.

Cebu Safari and Adventure Park: Engaging People to Care for the Animals and Environment